This is the first article about our unique Class Ratings and in this introduction these horse racing ratings are explained. You will see other articles from me in time and the websites users and quest for knowledge will drive these on the subject. All handicapping is done to give each horse a numerical figure based on, well that is the crux question. Given horse racing is managed by the Horse Racing Boards from each country, it is a good starting place for them to answer that.

The following snipped article is from the BHRB website regarding their comments on handicapping (click to expand). Which is in effect their form ratings explained From address…. https://www.britishhorseracing.com/about/handicapping/ 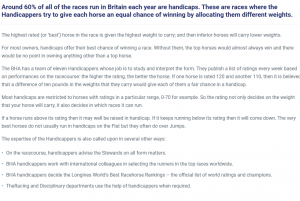 First thing that most people are aware of is that there are two distinct codes of horse racing namely Flat Racing and National Hunt. For these we work to two different weight scales.

Typically, we use a scale from zero to 140 for Flat racing and  0-175 for National Hunt Racing. However, a horse may get a rating above these. While you will see the Class Ratings figures calculated, in a completely different way to the official ones. We think it is good to try to keep within the same scales for many reasons.

The purpose of the Racingformbook Class ratings is to provide an accurate assessment by a numerical figure the performance level   of every runner. While I cannot reveal the complex computer workings and formulae used to arrive at any races Base Rating. I set out items here that are pertinent and worth noting

Overall, the ratings form a universal handicap embracing every horse that runs. Going forward to the figures appearing on the Racingformbook racecards and any other article. I deduct from the winner one point for every pound of weight carried that is less, with those carrying more, awarded an additional one point per pound. The starting point we use is 10 stone for Flat and 12 stone for National Hunt. This figure is arbitrary, but one I prefer to work with.

This is probably quite contentious and other people have their own rules around this. It was necessary to carry out research into this many years ago. I do revisit from time to time as to assess what the true worth of one length in weight over a variety of distances.  This actually led to less than a whole number resulting from my research, which I demonstrated in the previous paragraph.

The operative word there being more, as where in calculating the combined distance the figure is not a whole number, this is round up in all cases. As a horse beaten 3 lengths over 2 miles on the flat would be 3 x .75 = 2.25 which rounds up to 3 in total. Once this conclusion put to form students in correspondence, they tend to come around and accept the scale as being valid.

Rounding up is certainly as accurate in reality, whether this is due to a horses determination over another rounding up that extra half seems to matter over rounding down, when they meet opponents again. If you read the articles on using the RaceHorseFormBuilder Application  the actual scale used as is laid out.

This subject has had countless words written about it. Without doubt, racehorses will get bigger and stronger as they mature. However, what is not precise is like humans every individual changes at a different time and at varying rates.  I would argue that the tables published for WFA should be used as a guide rather than applying to every horse that ever races.

The Class Ratings do make minor adjustments in working out the ratings in relation to any result, where horses of younger ages mix with older ones. When it is applied, it is only to those runners who are at the sharp end of the contest. With the ‘also rans’, I am sure that there are other factors, rather than weight allowance for age, which contribute to being beaten.

Please note, for the WFA adjustment we do not factor it in, when it comes to the racecards as you see published, in particular as the Class Ratings shown.  I do publish a WFA allowance figure in the race details, as part of the racecards. This I denote with as a minus figure after the age that a race is restricted to i.e. (Class 2) (4YO plus -7). As such, a 4 year old, being the younger horse, if you wish, deduct 7 points from its rating. You are at liberty as a personal preference to make an adjustment, when assessing a race from the Class Ratings perspective. Which brings us on to the next subject.

When jockeys are starting out as apprentices or from the amateur ranks, they are entitled to claim a weight allowance. This means that a deduction of weight is supposed to be a manner to counter their lack of experience. Therefore, for the Class Ratings, any weight adjustment to the ratings are calculated  based upon the weight carried. This being determined by the race conditions and or BHRB weight allocated.

While for RFB  racecards  I do not adjust allowances in the ratings, though it can be a factor you may want to consider. There are certainly jockeys that come on the scene who are worth their allowance. If you do hold, a strong opinion on this then that is your subjectivity to add to the rating in such circumstances.

Similarly as with the Weight for Age allowance, this actually means you have to start becoming subjective about such matters.

One of my biggest bug bears and what started me developing my own handicapping processes was the over use of collateral form by others.

Reading the BHRB article above, that is what most handicappers tend to do. They arrive at a figure for a horse based upon the direct outcome of results where one beats another. On saying this, while I cannot see how the Official Ratings could be arrived at any other way.  What irks is the differences that similar handicappers have in their ratings sing such a similar method.

Handicappers should all be of the same opinion and should they not arrive at that, then what we have is pure human subjectivity or bias that derives at different outcomes.

I include three Class Rating figures in the Racecards. The best figure from last two race and last three races. The other is that from the last 12 months. There may be scope in using the figures gained from best rating at (near) distance run over, but for now these have their merits.

All these figures are those earned in the same sphere. To explain, that say for a hurdle race. The racecards will only show figures earned from hurdles and as such, the last two or three times that a horse ran in a hurdle. It may have run in a chase in its last two races, but these will be ignored, rather than enter zero for the ‘Best in last 2 races’ column.

Historically, as research shows it is the most significant, I always worked from horses last two races.  I include that third last figure as still being recent. A top two figure 3 races ago with lower ones from its last two races are always worth a closer inspection as to any reasons this is so.

With regard to the best figure from the last 12 months columns. This rating figure has actually done a lot of work for you by narrowing a race down to those with the highest rating, as ones to look more closely at. I have seen winners as a big as 100/1 with a prominent top two rating in this column. Horses are not machines that can produce the equal rating time and time again in their races. The trainers know this and the performances cycle, with this column normally the optimum when shown to be higher than recent races

I hope that this article has given you some insight into the Class Ratings figures. The resultant ratings are  uniquely different from those you normally see. Research is of course, an ongoing area with additional factors studied, to improve their potency further.  Please use the contact form or email admin@racingformbook.co.uk if there are any questions you have about the Class Ratings

Simply put RacingFormBook will help inform and assist you to find winners and enjoyment from Horse Racing. Provide a unique rating method and racing results data.

To further anyone’s ambition to use the information, whether this is as a point of reference, a repository for their ratings or to enable the research into racing systems.